Our attitudes to rape may be geographically and historically atypical 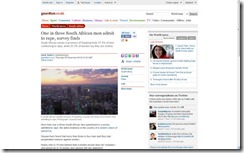 The Guardian reports  on the South African Medical Research Council publishing data relating to incidence of and attitudes related to rape. Pared down, the MRC claim that in response to their latest survey 37.4% of men stated that they had committed rape and 25.3% of women said that they had been a victim. This is consistent with a similar survey carried out by the same organisation in a different state in the country last year. The reporting on that survey also had some interesting responses indicating the prevalence of hegemonic male-male rape, which certainly could be seen as reflecting classical practice.

Noteworthy from the Guardian piece is the following:

Rachel Jewkes of the MRC said: "We see a situation where the use of violence is so widespread that not only is it seen as being legitimate but I think quite often women forget it. They just see it as a normal effect."

This last point seems that it might be particularly salient, and that our (by which I mean mainstream citizens of UK and similar societies) largely negative attitudes towards rape might obfuscate the extent to which it can be a normal part of the mechanics of a society.

South Africa is obviously a rather extreme case, having some of the highest incident rates of rape in the world. Undoubtedly there is are specific socio-historical causes behind that. Nonetheless, the extraordinary high incidency should urge caution over assuming our attitudes normal. This can be seen as part of the WIERD (Western, Educated, Industrialised, Rich and Democratic) effect identified by Henrich, Heine, and Norenzayan, which characterises the cultural biases from which we construct our sociological worldviews.

Just as rape is not atypical in SA, it was probably not atypical in ancient societies, including those of great complexity and sophistication. Rape, sadly, for many today and in the past is and was just a mundane fact of life.