On 'life and Death in Pompeii and Herculaneum', British Museum Firstly, there are some knock out pieces on display. Anyone who's ever looked through a library or bookshop reference section on Classical culture will recognise the fresco of Terentius Neo and his wife (which goes by several other monikers, of course), as it seemingly graces the cover of every other book on Pompeii, Roman life, Classical scholasticism and so on. It even adorns the front and back of the BM's companion catalogue. Several other frescoes will be very familiar, and its great to see them in the flesh. There are carbonised wooden furniture and food stuffs from Herculaneum, unique to site due to the unfortunate circumstances of its destruction, as are the incredibly moving resin casts of the body voids left by its human victims, man, woman, child and canine. Some of the more titilating pieces is how are great too, as they have previously been absent from the public mindscale of exhibition in the UK.
The museology and exhibition-craft sadly does not fulfil the promise of the items therein. The exhibit seems to be comprised nearly entirely of bottlenecks, exacerbated by the lack of items in centre-cases. Putting the display cases against the walls, typically in the corners, makes them difficult to get to as well as presenting only one possible viewer position for what are frequently practical 3D objects of everyday use. This, too, is not helped by the overly small and uninformative attribution panels for each item, leading to visitors stooping over each other to read them. Far more fatally to the historiographical integrity of the exhibit however is the decision to plan it as a typical roman domus. Of course no such thing existed, the layouts and uses varying wildly between sites and across periods of day, year and history. Deciding to ignore the extensive literature that problematises modern labelling and schematising of Roman domestic cells and floor plans, respectively, leads to falsity of presentation. For example, the cubiculum is identified on the intro panel to that room as the 'bedroom', as if there was a straightforward analogy between the two. That naturally leads to the assertion that it was the location for erotic themes, as sleeping and sex assume the primary dual function of modern bed chambers. But at least one of the frescoes on display here is identified by the attribution as actually belonging to a tricinium. The only reason for its inclusion at this point is a decision to force the material to a thematised false scheme. It is not the only time misplaced thusly to match these themes, such as a fresco of Flora moved to fit with the hortus display room. 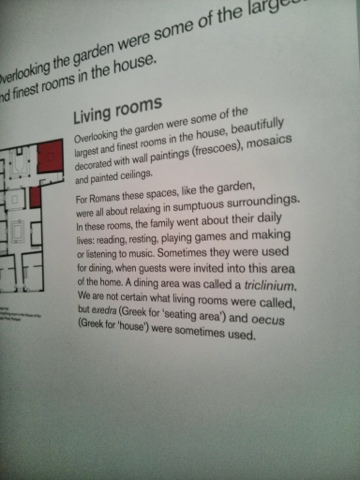 The ultimate extension of this naive approach is: "we are not certain what living rooms were called, but exedra ... and ... oecus were sometimes used." This is only a problem if one starts out with the conviction that the functional identities of the modern household can be mapped onto that of the ancient.
Despite these the naive and often uncomfortable visitor journey, the exhibit is definitely worth it for the uniqueness and moving artefacts. It was great to see so many elderly visitors taking advantage of the first time many of these long famous and infamous objects have reached our shores. But if you want to see how see the building-within-a-building display of history, go to Baracelona's MNAC.
exhibition museum rant
Location: London London