June 22, 2015
As you, dear reader,* might already be aware, I'm a co-ordinator on an outreach project. It's called SHARE with Schools.

The name is supposed to be a cunning play on words, SHARE being the internal, University acronym for the School of History, Archaeology and Religion, though I'm actually pretty dubious about it as a name: on the one hand because no-one is really aware of the acronym outside the University (after all it's supposed to be internal), and on the other because I gave myself the task of getting the online resources up to scratch when I joined the project, and, surprise surprise, "share" is a pretty common word to find online. That doesn't help with the whole search engine optimisation thing.

Anyway, I've been on the project for the last two years now, since I decided to drop back out of real life change careers by starting on a PhD. Over the last year or so, with some key members finishing their degrees and moving on to other things, I've taken an increasing role, and so I ended up taking the lead in organising the recent Return Visits. These are where instead of us travelling out to the schools, they come to us. It's supposed to to buy into the whole reciprocity of the project, and certainly ties in really well with our Widening Access remit. We do however try to vary the sessions we put on from the workshop tool kits that we take out to the schools normally. Partly this is to avoid repetition of materials and activities that they might have done before. But its also in part because we can take the lead ourselves, rather than training (mostly) undergraduate volunteers to do so. As such they can be a bit more research led, or if not that then a bit more tailored to aspects that we find interesting ourselves. 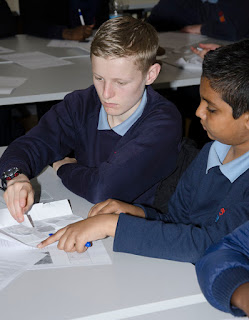 And so I came design a Roman Caerleon session.

This enabled us to offer something Roman-based that would fit in well with the small look-in that ancient history gets into the curriculum, to discuss a site that many of the children might have been to, and to focus on a more specific set of issues.

I'd recently taken a few PhD buddies out on a road trip to the Roman sites at Caerleon and Caerwent, or Isca and Venta of the Silures as they were respectively known in former times. Caerleon, Welsh for 'the fortress of the legion', was the military hub of what is now South Wales, whereas Caerwent was the civic administrative centre.** So Caerleon was fresh in my mind. Also I owned a copy of the Cadw guide to the site. This publication is actually really good, and made a great basis from which to develop my session. 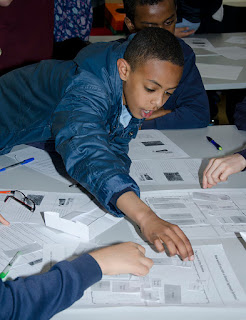 The basic structure was fairly obvious. I had thirty minutes to fill, which isn't a great deal of time. I'd start with a brief discussion of the sources for historical evidence, i.e. textual, historical, artefacts, standing archaeology. I had a couple of old books from our Sheila White Classics Library to get them thinking in small groups about this, along with the largest fragment of amphora that I could find in the SHARE with Schools outreach collection. To end I wanted a bona fide activity, something to get them going in groups, and not just a boring old quiz, that stalwart of classroom interaction. And I also wanted to get them thinking about Roman history as relevant in the multiphase, multilayered context of British history.

My solution was to base the meat of the conversation on issues of planning the military settlement, and how the footprint and form of modern Caerleon is influenced by the ancient one. This would let me get around to throw dates and names at them too, as the specifics of the history of the invasion and provincialisation of the Silurian Brittani wasn't the focus.

Of course, I knocked together a pretty but short powerpoint to help. Here it is, though some of the positioning and effects aren't quite right the way Google Docs renders them.

To get them talking about the multistage development of the modern town I got them to look at the Google Earth image in slide 2 and had a volunteer pick out any oddities in what they could see. In this I guided them to notice the amphitheatre, barracks and South stretch of wall, all of which are quite visible from the air if you know what you're looking at. This also enabled me to get them a bit excited by talking about gladiatorial combat and venationes. I highlighted the plan so they could see what I was talking about, and followed it up with a map (slide 3) to show the ways in which the later medieval and modern road layout roughly follows the kardines of the Roman settlement, with a crossroad joining gates at the four cardinal points, and exterior roads following the lines of the now disappeared walls, Mill Street in particular.

Finally, I challenged them to put themselves in the shoes (sandals?) of a military planner. I gave them in small groups A3 photocopies from a page of Cadw's guidebook, but with the buildings blanked out. They also got a little pack of tiles with these buildings on, and a crib sheet to explain what they are. I asked them to fit the tiles in in what they thought was the most sensible manner, prompting them to think about their decisions based on what the crib sheet suggested.

I thought they actually engaged really well with this activity, and made some smart decisions on what to place where. I revealed the actual reconstruction (which I'm sure is a bit out of date by now but decidedly sufficient for our needs) at the end. But I stressed that the point wasn't about getting it right or wrong, but rather to get thinking about the principles that underpinned decisions made nearly two thousand years ago that still shape people's lives today.