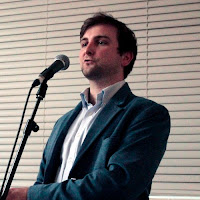 Recently I went along with a PhD buddy who was participating in an event called Public Uni. It consists of several ten-minute talks to a public audience by researchers at Cardiff University and is currently held at the Chapter Arts Centre in Canton, Cardiff, a few minutes down the road from my apartment. Subsequently, my name was passed on to the organiser and I was invited to do my own talk.

I accepted unhesitantly. I'm fairly comfortable talking to groups. I also have experience with public engagement in of a different stripe, on the one hand from having had to convey complex information to my team in my former life in retail management, and also from my work with the SHARE with Schools project. In this regard I count myself fairly lucky, public speaking can be really daunting to many.

Quickly I came to the decision that I would cannibalise a talk that I've given successfully a couple of times to academic audiences. Obviously I would need to make sure that it was not just accessible but also have an accessible hook too. The title became 'can the ancient world tell us anything about modern acts of genocide?' with the description: 'David Colwill, doctoral student in Ancient History, talks about Rome's destruction of Carthage, which has elsewhere been dubbed 'the first genocide'. I think that this neatly provided an intriguing proposition: while requiring no knowledge of Carthage and very little of Rome (i.e. most audiences) it establishes a credible association between the research and the idea of genocide. I figured the audience could be relied on to at least know that genocide was A Very Bad Thing.

Knowing the event info was hosted an a publicly accessible Facebook group I also included an image even though I hadn't been asked to. It's a brilliantly chaotic engraving of the siege of Carthage by Georg Pencz. Using an image in online promotion demonstrably increases engagement with the content. I also asked if there was any flyer or promotional info that I could use to advertise the event. What was forthcoming was, shall we say, subpar, so I knocked the following social media advert. 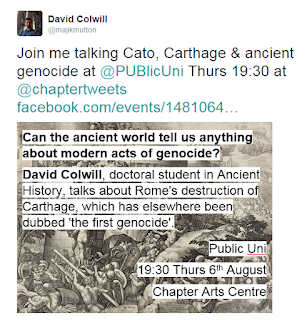 The accidental inclusion of MS Word's grammar and spelling checker (yes I hacked this together using a university computer in the office) notwithstanding, this image was seen by about a thousand people. I also made sure to include as much linked data as I could in the tweet to ensure that it got at least a few RTs to maximise eposure. This also ensured that academic and administrative staff were aware of my activities, which is always a boon.

In advance I made some outline notes about what I wanted to say but I left the actual writing of it until the day so that it would be fresh to me. The script worked out to be about eleven hundred words, which is pretty much spot on for ten minutes. 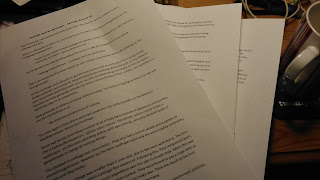 Having read this through to check it flowed correctly, I the transferred the key points to notecards. This would ensure that I hit the right points in the right order, especially as I was telling a story with the repeated refrain 'Carthage must be destroyed/Carthago delenda est'. I would have liked to have talked it freely but decided to compromise with no forgetting key points.

I was satisfied with the evening. I couldn't tell whether the mic was doing anything and I definitely want to get more used to them. It was a fun experience and I'd definitely recommend it to others.
Cardiff university Carthage Cato Chapter Arts genocide presentations public engagement Public Uni speaking
Location: Cardiff, Cardiff, UK