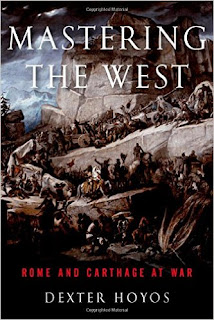 I wrote a book review. It's for an online series run by Classics for All, and is a continuation of the older JACT book review series. JACT recently merged with the Classical Association and so its properties have been either subsumed or renamed. It has what the blog's strapline admits is 'a temporary home' at https://classicsforallreviews.wordpress.com/, where my review should appear soon [edit: my review of Hoyos, Mastering the West is here].

I would've liked to have finished writing the book review a few weeks ago, but a delay in sending the review copy out to me pushed its reading into a busy period. It had to wait while I completed a chapter for annual progress review, spent a week in Swansea brushing up on my Latin and lots of other bits and pieces. You know, the usual doctoral stuff. (I'll have to blog about some of that soon.)

So, finally having has chance to get all the way through the volume, i set about penning my review. I often write mini-reviews of works I've read, but they tend towards the idiosyncratic and snarky, and very much for Eyes Only. So, getting the real thing ready for public consumption took a couple of days. The guidelines for the review site specified they should be about 400 words long and aimed a general audience. As usual, small low limits proved more time consuming than longer forms, but, again as usual, proved a useful exercise in concision, augmented by the need to explain the fundamentals to a generalist reader that could otherwise be left implicit for the specialist.

My second supervisor, who very kindly sent me some late night notes (a review-review? meta-review?) having just started annual leave. Of course, his quite astute observations led to more that needed to be included. In turn this led to innumerable rewrites to get it back down to a reasonable length. First reaction from the CfA Reviews editor were pleasing (though I'm sure he says that to all the girls, as it were, so I'll remain modest).

Below is my review text, for posterity. But even more than that I'd urge you to read this review by the eminent Robin Osborne. It shows, with a darkly comedic edge, the valuable role that criticism can have in the book review, and that not all such reviews are glowing regardless of merit of the reviewed work.

Mastering the West: Rome and Carthage at War

Hoyos has previously authored important monographs, articles and edited volumes on Rome, Carthage and the Punic Wars. This métier makes him ideal to produce this clear and accessible narrative. It deals chronologically, in fourteen chapters, with the conflicts between Rome and Carthage, both of whom H. sees as equally powerful, imperialist republics. It usefully provides, as far as is possible, the Carthaginian perspective as much as the Roman. He argues, as he has elsewhere, that the Punic Wars were largely unintended: the first (264-241 BCE) resulted from both republics becoming drawn into Sicilian politics, the Romans more fearful of Syracuse than Carthage; the second (218-201) due to a diplomatic kerfuffle over the insignificant Spanish town of Saguntum amidst differing expectations of evolving spheres of empire; the third (149-146), which led to the destruction of Rome’s erstwhile opponent, was itself an avertable calamity.

Throughout, H. stresses Rome’s perseverance in the face of overwhelming defeats that would have crushed other ancient states. This is rightly coupled with the curious frequency with which Carthaginian commanders proved unwilling to capitalise on advantages, although H. also does not spare criticism for often disastrous Roman leadership. The factors are best seen in his lengthy account of the Hannibalic War. Rome fought on despite the triple disasters of Trebia, Trasimene and Cannae, while Hannibal, for all his military genius, proved unable to besiege Rome itself because Carthaginian reinforcements continually failed to materialise. Rome’s willingness to commit manpower en masse and Carthage's miscalculations culminated in the latter’s eventual annihilation.

Broadly speaking, H’s arguments are effective. He treats the three Punic Wars rather fully, but does not neglect to discuss the otherwise predominantly peaceful relations between Carthage and Rome. At times his interpretations are rather personal or digress into counterfactuals. However, these enliven the long narrative stretches, effectively engaging the reader in reconsidering the inevitability of the Punic Wars and the emergence of Rome as a Mediterranean superpower.

The more advanced reader might wish for greater discussion about limitations of our knowledge of the period, but this would have been at the cost of the book’s readability and accessibility especially to the general audience. H. laudably balances this by including a short appendix discussing the textual, numismatic and epigraphic sources. Also included are a timeline and glossary to specialist terms as well as ten useful, well-rendered maps prepared by the author. These greatly complement the readable prose. Endnotes are used sparingly and surgically. I found only one typo (p.200: ‘an.d’), the book otherwise being as well-edited and produced as the text is written.

Although H. says little that he has not already said elsewhere, this is a solid and eminently readable contribution to the fields of Punic and middle Republican studies. Its accessibility, erudition and scope will make it an essential addition for either the general reader or those pursuing undergraduate studies.