Wrangling with 3D at a Digital Classics Workshop, Institute of Classical Studies

September 25, 2015
If you're involved in some fashion in the study of Classical antiquity, or are a longsuffering friend of mine who has to listen to me blather on about such things, then you'll know that the Institute of Classical Studies (ICS) at Senate House, London, is a near peerless collection of works on the field. I'm trying to make trips there more regularly in order to do to literature surveys related to my geographically dispersed case studies. This week's trip there however coincided with the first time I'd enrolled to do a workshop offered as well: 3D approaches to cultural heritage and landscape.

I think I was quite lucky to have got a place. The smallish IT training room, located in the Institute of Historical Research in the opposite wing of Senate House, was at capacity; I'd booked on only a little over a week before, and it seems that there was a reserve list in operation so I probably took one of the last places on offer.

It was billed on the Classicists Listserv as:


The Institute of Classical Studies is offering a training workshop for postgraduate students and researchers on the use of 3D approaches in the study of cultural heritage artefacts and landscapes. The workshop will offer a basic introduction to the principles behind 3D imaging, modelling and representation of terrain and elevation, and how these can be used in research as well as visualisation. It will also give participants hands-on experience using simple and free software packages to produce complete 3D models and visualisations, with methods easily transferable to their own research.

No previous digital experience is required, but participants should bring a laptop and a digital camera or smartphone and be prepared to install some free software in advance of the workshop. This workshop has been made possible by the generous support of the LAHP and AHRC.

The software to set up in advance was 123D Catch web app (warning: at the time of writing this seemed to be broken for Win10 Chrome, use Edge or Firefox or a different OS), Meshmixer, and SketchUp (formerly a Google property but nowadays hived off). As the workshop leader Valeria (a PhD student in the Department of Digital Humanities, KCL, who proved herself to be an excellent teacher by the way) stressed during the day, these are not necessarily the best products available. But they were the optimal combination when it came to price (i.e. free to use), interoperability and ease of use. This was after all a one-day workshop aimed at novices.

I went primarily because I was interested in 3D visualisation of landscapes as a way of presenting my thesis arguments about the role of destruction and urban recreation in relation to terrain and regional landscape. This unfortunately only amounted to a very small portion of the workshop, essentially consisting of importing a geolocation from Google Maps within SketchUp (integration no doubt afforded by Google's history owning the product). The SketchUp portion, though the sort of thing I actually enjoy playing with, was less useful to me because I'd used that and similar packages before, though I make no claims to being an expert with them. So for me it consisted of a fair bit of getting five steps ahead and waiting around for the rest of the class to catch up (sound like to school experiences to anyone?).

Getting an artefact from real-life into a 3D computer model


The 3D photogrammetry took up the first bit, and was fascinating. Fundamentally similar to software I'd previously used to stitch together photo panoramas, it was fun and surprisingly easy to use. I'd like to find some excuse to try this again, possibly in connection to my outreach work with SHARE with Schools...

We had a statuette of a flower girl (probably a fairy or angel) to import. It was placed on newspaper to give the programme a stable set of points of comparison from which to build the 3D model. The room we were capturing in had a strong light source from the large window, and the object was reasonably complex as well as being dark and shiny. This would prove not ideal for imaging... 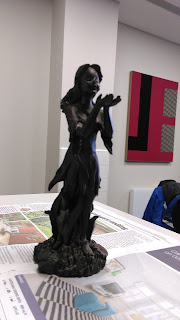 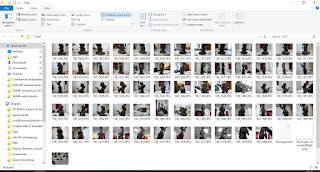 ... we found that she had suffered amputation and decapitation! Also one side of the model was substantially lacking in detail compared to the other, due to the strong light from the window messing underexposing the model on the far side.

This model was downloaded to and viewed in MeshMixer, which integrates with 123D. 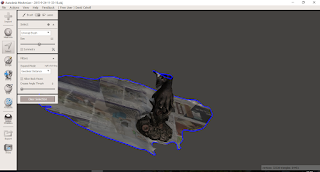 We removed the newspaper base fairly simply to produce our model. Which was exported as a COLLADA file ready for the next step. 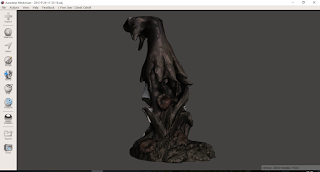 Building a temple of Isis

So we built from scratch the ekklesiasterion to the temple of Isis, extruding the basic dimensions to match those of the real thing in Pompeii, though simplified. 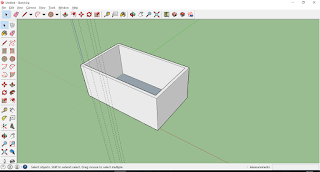 Inside which was imported images reconstructing and recording the wall decorations from the excavation reports of the site. 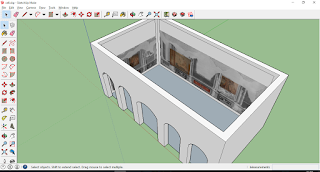 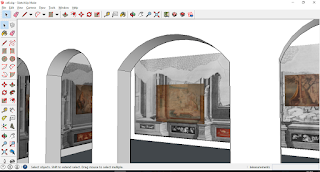 A Venus de Milo was used as a stand-in for a statue of Isis known to have stood at that location (and as a modern day example of syncretism),. I added some colour patterns to my model while no one was looking. We imported the COLLADA file of our 3D artefact, and were challenged to emplace it in the 3D structure that we'd envisaged and to come up with justification for our decisions. This was part of Valeria's quite rightful reiteration of the importance of documenting and making transparent the process of reconstruction, in order to explicate the myriad biases and choices that must be made. For more info on this take a look at the London Charter for the use of computer-based visualisation of cultural heritage, especially Principle 4. 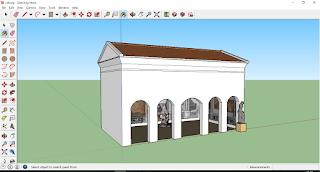 Situating the reconstruction within a landscape

This bit was extremely simple in SketchUp. The location was simply typed into a map location import dialogue, and cropped to our own liking. The structure was then rotated and moved to match it's real world location, besides the temple of Isis and next to the grand Theatre of Pompeii. 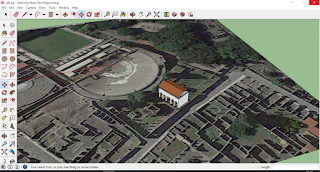 A toggle switches on or off the elevation data attached to the map. This bit really drives home the usefulness of locating reconstructions within a contoured context! 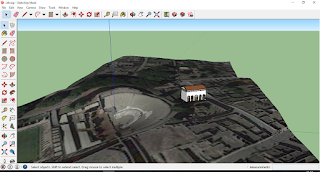 I gave my final scene a bit of fogging and some labels. For fun. 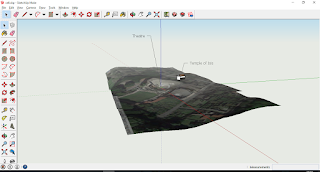 Preparing the activity pack and practice Back in April, I was asked by the ever-awesome Dr Phil Jemmet of Hopefully Nothing Goes Boom!  to help out at a public engagement shows at a Whitley Library. At the time we were both working for the same National Collaborative Outreach Programme partnership, which is normally highly targeted, so this was a chance to go for some wider, community-focussed fun stuff. He was going to put on some of his science communications presentations (which did look a lot of fun) and gave me a brief that went something along the lines of "there will be an unknown number of people of various ages, do something fun and archaeologyish with them" (definitely not verbatim). So, a free reign! I'd helped Phil out at some sessions in one of his Widening Participation schools with an adapted version of my Caerleon Roman fortress workshop, but that wouldn't have been right here, and plus I wanted to try out some fun new stuff. I quickly settled on
Read more

I've always liked playing video games but didn't ever really have a lot of them growing up. So the advent and growth of popularity of the term metroidvania didn't really mean much to me. I had Metroid II: Return of Samus  on the Game Boy (quite a bit of my exposure to gaming, and especially to Nintendo gaming was in the form of their "withered technology" portables) but frankly found it very difficult as a child and never got very far with it until my recent play through on the original cartridge using my old Game Boy Advance. Oh I'd played modern era Metroid games, I loved the Metroid   Prime series on the GameCube/Wii; the first, especially, captured the ethereal, lonely solitude of being the only soul standing among the ruins of past civilisations (although the mega-flies and razor grasses of the average archaeological site poses fewer dangers than the strange fauna and flora of Tallon IV). And I tried more than once to play, but hated,  Metroid: Other
Read more

Just for fun. Here's a sort-of infographic of the vital statistics for my final doctoral thesis on genocide and Rome. Although, yes I know proper infographics don't usually use emoji. If any of the below doesn't render for you or looks weird, you must have bad emoji sorry.
Read more