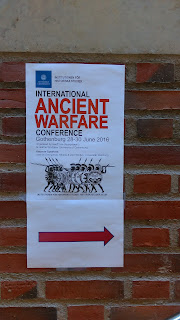 A few hours ago I delivered a paper at the 2016 Ancient Warfare Conference, held this year in the lovely city of Gothenburg, Sweden.

I had a few technological issues. My powerpoint, which I'd just got finished late the night before, wouldn't copy to the laptop being used to run the AV or run from the USB drive. I couldn't tell what the problem was because the error message was in Swedish and the best I could get out a the only Swedish speaker in the room was that it was an error message. I unfairly neglected the two papers in the panel before me, while I did my best to create bit.ly links to the dropbox files through the ipad and offlined them to my phone. What I wouldn't have given for to have brought my laptop with me like I'd originally planned, I could have just exported to PDF.

But, all was for naught. My time to speak and it still wouldn't work: couldn't get the phone to mount as a visible storage device, and still didn't read Swedish to work out how to do so, and turned out the laptop wasn't connected to the internet. So I had to go improvise without the slidedeck. 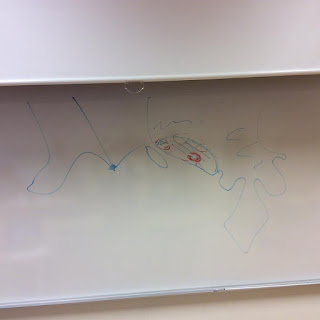 I was reading notes from the iPad, so that wasn't too bad. The slides were mostly there to provide the source references that I was using. And a few maps, so I had to go old skool and use the whiteboard. Sketching the map of Italy, Epirus and Greece went really well, and to be honest actually probably worked better than just pointing out places on the map. I sometimes think about building that sort of interactivity into my presentations, but never actually do. But, while leaving fidelity to be desired, it worked really well. Although my panel chair Helene Whittaker did complement me on it actually being quite good all considered, I'm not convinced it'll be winning any cartography competitions any time soon.

The rest of the presentation was ok, having to adapt it on the fly a little around places where I was going to refer to the slides, slightly altered my timings and delivery, and as it was fairly late and I was coming up on the end of my time, I finished without doing the notes from my final couple of slides. I probably actually could have though and I could have developed my argument and arguments as a consequence. I managed to get some of the material into the q&a session though so at least there was that.

Not bad experience, and so really good discussion afterwards I thought, but it will definitely come off better next time.

Here's a e-copy of the handout that can be downloaded, with the sources that I referred to in this talk as well as some selective bibliography.
Aemilius Paullus conference enslavement Gothenburg IAWC2016