June 21, 2016
Been up to a lot recently: got married to my fantastic partner, took a honeymoon adventure trip to Peru including trekking the Inca trail, and squeezed in a research trip to Greece--concentrating on Epirus but also taking in Athens, Corinth, Mycenae, Olympia, and Delphi--funded by the Arts and Humanities Research Council Research Travel Support Grant scheme. Yesterday was mostly spent corralling the massive pile of receipts and filling in the claims form, with each of the 35 or so receipts individually accounted for. Submitted them today, along with another for my conference trip to Gothenburg.

In Gothenburg I'm speaking on a major strand of my research next week at the International Ancient Warfare Conference 2016. My fees and travel are being generously covered by the postgraduate travel fund at the Cardiff School of History, Archaeology and Religion. It's about reconstructing a mass enslavement event, about historiographical dissonance when accounting for the wrongdoing of an exemplary figure, and about suggesting a new angle on the intention. The trip to Greece a fortnight ago will really help by giving me access to some of the sites I'm going to be talking about, as well as some resources. Title and abstract below.

“So contrary to his mild and generous nature”: Aemilius Paullus’ mass enslavement of the Molossians 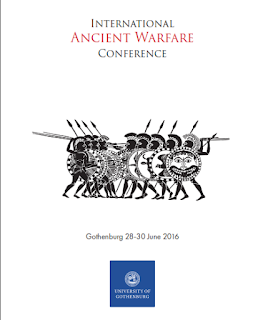 This paper looks at the disjuncture between the actions and literary presentation of one of the Roman Republic’s exemplary military leaders, and how ancient attempts to reconcile this dissonance have distorted modern historiography.

One morning in 167 bce a Roman army under the command of Aemilius Paullus enslaved 150,000 people from seventy settlements in Molossia, a once prominent tribal region of the federated republic of Epirus. The Molossians had unwisely supported Perseus against the Romans in the Third Macedonian War. They were quelled by praetor L. Anicius Gallus whilst Paullus was successfully pursuing the war against the Macedonians, with the systematic, mass enslavement occurring on Paullus’ return journey to Italy.

This act, so effectively destroying the Molossian ethnos that Strabo (7. 7) commented on Molossia’s desolation in his own day, was deemed by ancient authors to be contrary to Paullus’ exemplary and ideal Roman character. Thus, Livy (45. 34. 1-9), Plutarch (Aem. 6. 6, 11, 29) and Appian (Ill. 10. 2. 9) portrayed it as uncharacteristic of the gentle-minded Paullus and made the Senate culpable in their narratives.


There is no evidence of contemporary censure regarding the enslavement however. In this period, mass enslavement, even when effectively eradicating an entire group, was instead within a normative range of treatments available to Roman commanders towards communities who had placed themselves under their authority (fides). It was only later, in attempting to manipulate Paullus into a literary ideal type, that this act of mass enslavement was rendered incongruous.
abstract academic Aemilius Paullus ancient-history archaeology conference enslavement Epirus funding Gothenburg historiography IAWC2016 Molossia presentation presentations SHARE travel
Location: Cardiff, Cardiff, UK