Just where the f*** is the Colline Gate (Porta Collina), Rome anyway?

September 01, 2016
While chasing down some references, I came across this passage from Livy 41.9, where he is recounting some portents noted in 177 BCE:


While these were being reported, a wolf entered the City by the Colline Gate in broad daylight and was chased till it escaped through the Esquiline Gate, amidst great excitement on the part of its pursuers.

While I've read this passage before, I decided for whatever reason to look a bit more into what symbolism would be implied by entering through the Colline Gate (a.k.a. Porta Collina) and exiting through the Esquiline Gate (Porta Esquilina). I didn't get very far on this though, because something didn't add up when I went to double check the locations.

I had a pretty good idea of where I thought they would be, but wanted to make sure and be a bit more precise (actually just as well because I had mixed up the Portas Collina and Viminal Gate (Porta Viminalis) ... oops, they are pretty close together in my defense, just either side of the massive Baths of Diocletian). But a cursory Google search wasn't very elucidating: most information (I'm looking at you Wikipedia) was scant and descriptive without including a map; or else were cartographical but didn't indicate the location in the modern day. I wanted to relate the passage of the wolf to places I'd visited. So next I turned to Google Maps.

But searching for the Porta Collina (it couldn't parse Colline Gate) just didn't look right at all. Far too South, and for that matter close to the Esquiline Hill--the P. Collina was the most Northerly gate of Rome. The portent would be wierd if it came through and left by gates right next to each other. 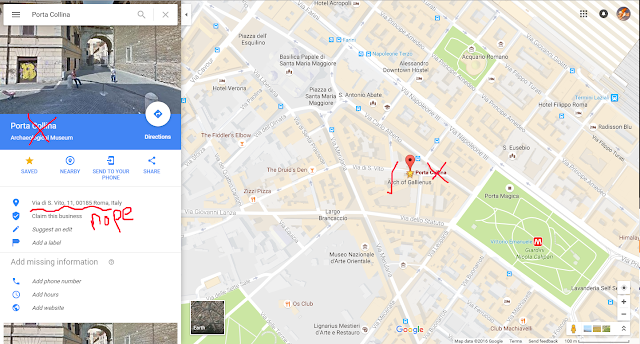 A bit of probing showed the answer. The mapping of the P. Collina is currently wrong and is actually the same location as the Porta Esquilina (which Google has labelled under yet another a.k.a., the Arch of Gallienus, although at least it still parses it from Porta Esquilina).

Someone at some point has duplicated the still-standing arch (which is indeed known as the Arch of Gallienus, although the bits built specifically in honour of Gallienus, which were two supplemental archways, aren't there anymore, and mislabelled it as the Porta Collina. It's one of the perils of collating data from so many sources, including user-generated information. This is especially a problem when so many other services then build their mapping layers from Google Map information, or cartographic services further upstream, depending on where the error came in in this case.

If you need to know, the Colline Gate, a.k.a Porta Collina, is on the Via Venti Settembre, on the north side of the Baths of Diocletian, at about the site of the Museo della Zecca.

I've submitted an edit, but the form doesn't currently have a field to explain the problem, and there's no other Porta Collina visible (because there's no standing structure), my duplication report might be rejected and future users might be vexed by where exactly a wolf might have gone one day in 177 BCE.
cartography incorrect data Livy maps rome wolf