CfP: Ethnicity and Imperialism at the time of the Roman Republic (CCC, Montreal, July 2017) 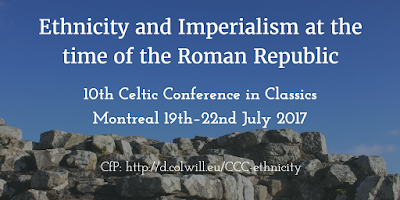 I'm organising what I hope should be an incredibly exciting panel at the next Celtic Classics Conference next summer. The conference website http://www.celticconferenceclassics.com/ looks brilliant, but at the time of writing doesn't yet have the calls for papers up, so here's mine.

We've got a couple of excellent speakers in the pipeline, but plenty of room. I'm looking for quite a broad cross section of speakers on the theme, not just restricted to Roman studies, nor to speakers from the nominally 'Celtic' nations!

Share, and get back to me with those abstract proposals!

Update: The call for paper is now live. However, I am now able to reveal our confirmed speakers but cannot alter the official site directly, so the below is an updated version!

Call for Papers: Ethnicity and Imperialism at the time of the Roman Republic
panel at the 10th Celtic Conference in Classics, Montreal, 19th – 22nd July 2017

‘… But they did wipe out the Etruscan existence as a nation and a people. However, this seems to be the inevitable result of expansion with a big E, which is the sole raison d’être of people like the Romans.’ – D.H. Lawrence. 1932 (1986 ed.). Etruscan Places, 31

When D.H. Lawrence wrote his Etrurian travelogue, he did so with an intuitive understanding that ethnicity and imperialism are entwined concepts. Much recent scholarship into the ancient world has looked into either ethnicity or imperialism in this period, but few have made the link between them explicit. While Mattingly (2013) has looked at some of these entwined factors for the Imperial period, his work remains an exception. The entwined concepts of ethnicity and imperial need further exploration in terms of their interactionalism and mutual contingency.

The panel seeks to represent varying approaches from different national scholarly traditions to ethnicity and imperialism at the time of the Roman Republic through a series of thought-provoking papers. Neither imperialism nor ethnicity exist in a vacuum. As such, relevant cross-cultural studies from co-temporal imperial societies, particularly from Hellenistic, Punic, and Near Eastern studies, are encouraged, as are interdisciplinary approaches.

Applications dealing with aspects of the following are sought, although proposals on other relevant themes will be considered:


The panel will consist of 12-15 speakers giving papers of 35 minutes each, followed by 15 minutes for discussion. Shorter papers may also be accepted. Papers may be delivered in English or French.
Confirmed speakers include Prof Arthur Eckstein (Maryland), Dr Paul Burton (ANU), and Dr Guy Bradley (Cardiff).

Submissions for up to 200 words plus a short biography should be emailed to ColwillDJ1@Cardiff.ac.uk by the end of Wednesday 11th January 2017. Any informal inquiries are also welcome at the same address.

About the Celtic Conference in Classics
Since 1998 the Celtic Conference in Classics has rotated among universities in Britain, France and Ireland. This is the first year that the CCC will expand into North America. The CCC includes upwards of 20 panels on broad topics in Classics (Greco-Roman history, philosophy, literature, archaeology, reception) with roughly 15-20 presenters for each panel. Rather than small panels on many topics, the CCC allows each panel to explore fundamental questions in classical studies. Essentially, 20 large-scale conferences on major research topics in Classics are occurring simultaneously.  It is recommended that scholars move between panels in order to shape interdisciplinary perspectives and approaches. Academic cross-fertilization is imperative. Specialist panels are open to experts from other subject-areas and scholars from different national traditions are encouraged to build international academic networks among their home institutions in order to foster future collaboration. The CCC is a democratic, inclusive organization and it invites scholars and students to discuss fundamental issues of Greco-Roman society and culture. The official languages of the CCC are French and English.

All participants must bear their own expenses. For information about the Celtic Classics Conference 2017, including fees, see http://www.celticconferenceclassics.com/