Who killed the Legio IX Hispana?

June 19, 2017
See what I did there? Yes this is indeed a little post about the recent Doctor Who episode 'The Eaters of Light' (S36e10). It's not a review, I'll leave that to others.1 Nor is this supposed to be a crotchety list of complaints about the things they didn't get historically accurate, though it might be superficially similar. Instead, I just want to pick out a couple of things that I think interesting and representative of how the ancient Roman world is used in contemporary texts.2 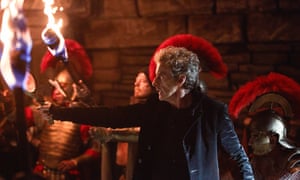 Based on the preview at the end of the previous episode I had really, really hoped that this would be about the Varian Disaster, a.k.a. the Battle of the Teutoburg Forest. The complete annihilation of three whole legions and their auxiliaries there in 9 CE was a catastrophe to the Romans, sending shockwaves through their empire and engendering real changes in strategy and approach to imperial augmentation. How much fun would it have been if it turned out that it wasn't a Germanic ambush that did for them, but some sort of alien menace! Maybe some sort of alien dryads, how awesome would that have been. And, the location of that battle, which we know actually happened, has been a serious mystery for centuries, although an increasing about of archaeological evidence points to a 15 mile long battle in Lower Saxony.

Instead....we got the 'mystery' of the 'lost' Ninth Legion. Again. There's nothing inherently wrong about this, per se. Of course, most (but not all) historians have long thought it a misunderstanding of Th. Mommsen, which sunk and then was resurrected by Rosemary Sutcliff's historical novel The Eagle of the Ninth in 1954. Since Sutcliffe, it has been done to death. Check out Wikipedia's list of popular fiction and culture appearances of the Legio IX, which at the time of writing has nineteen entries after her novel in various genres and media. Several major films of the last decade used Sutcliffe's book as their inspiration.

So, the ninth legion is a pretty tired option. Especially when there is so much fertile material from the literature and archaeology (i.e. evidence) of the Roman occupation of Britain. The same themes and even the entire script could pretty much have been played out in more genuine, attested scenarios. The would serve the BBC's public remit: both entertaining and educating.

The script even went to far as to quote Tacitus' most famous line, from his Agricola. The Pict warrior Kar says, 'their work is robbery, slaughter, plunder.  They do this work and they call it empire. They make deserts and they call it peace.' While a pretty close translation, and interestingly not one that I can find exactly elsewhere, this throws up a few issues.

First, Tacitus has the snappy phrase be said by the Caledonian chieftain Calgacus in preparation for the battle of Mons Graupius. Transposing it from the somewhat decisive victory for the invading Romans over the Caledonians to an opposite scenario changes its signification and dramatic irony. Plus, once again, the source for the line details something which actually happened, with the same peoples and themes available to adaptations, so why not just do the thing that did happen?

Secondly, the episode re-encodes and reiterates the point without interrogation. And it needs interrogating. It is an anti-imperial sentiment written by a elite citizen of the very empire that it decries and put into the mouth of a barbarian opponent. In effect it is a similar thing to the episode as a whole, which can be taken as a commentary on the postcolonial United Kingdom. At least the Doctor's response of 'yeah, but you've got to love the indoor toilets, yeah?'--itself a re-encoding of Monty Python's 'What have the romans ever done for us?' bit--represents a criticism of sorts!

The core reason for all of these problematic points is how historical literacy is transmitted from media to media. It is symptomatic of the perceived need to provide prior knowns to the audience, and to the inability of most film and television writer to conduct research outside of watching other films or television programmes. In this way, certain events, gestures and modes become canonical. For comparison look at the way that Victorian visual culture cemented the idea of the meanings of the signifiers of the thumbs up and down to gladiators in the arena, which is at best a mild misunderstanding of the ancient literature; or the proliferation through film of various bizarre 'Roman' handshakes and salutes, arising in part out of the same visual culture and of the rise of fascististic movements in the nineteen-thirties.

Playing merely on prior cultural representations of the historical past in this way is intellectual laziness.

It's a laziness that is unfortunately prevalent in all levels of our society; the assumption that we 'just know' about the past leads to all sorts of damaging ideas, of self, of empire, of human nature, being peddled in both academic and popular culture.

Having said that, I did really like the ways in which the episode interrogated the both contemporary constructions of gender, sexualtiy and ethnicity through the prism of ancient cultures as well as contemporary perceptions of those issues in the ancient world.

Primarily I really liked the ethnic mixing, which was baked into the episode without the need to explicitly comment on it. The previous episode from this series, 'Empress of Mars', similarly included a black soldier among the red coat detachment on Mars, without needing to comment on it. This normalisation of the historical presence of nonwhite people is something that Doctor Who has not done very well of late, especially since Russel T. Davies handed over the reigns. Incidentally, Davies's TV adaptation of Casanova starring David Tennant did it wonderfully.

The Roman empire spanned continents, and would have been ethnically diverse. All sorts of evidence shows military personnel and civilians inhabiting the Roman outposts and cities of Roman Britain from Syria, Libya, Spain and so forth. Skeletons have even been found that are have characteristically chinese morphologies, although it's likely that these were Chinese people who had moved to the province from other, intermediary countries.

The erasure of nonwhite faces from the historical record is a real issue. Some are resisting this narrative. The People of Color in European Art History tumblr documents historical paintings that record their presence at all levels of society. Sarah Bond recently contributed an excellent and rigorous article to Forbes on the issue of literal and figurative whitewashing in regards to the known polychromy of ancient art and architecture. Both have been attacked for daring to countervail the prevalent cultural discourse of Roman and European history as white history. The more popular culture media that normalise the representation of nonwhites in these contexts, the better for the understanding of the past and the better to mitigate the resulting misuse of the past to justify odious philosophical positions today.

I also really liked the way that the episode managed to both hit upon and undercut in a normalising way the thematic point of Bill's lesbianism by implying that she was a bit narrow minded by picking only one of the sexes to be attracted to. It was a fantastic conceit. It maybe overstated the point a little, but probably not much. Crucially they did it in a way that discussed sexual preference and avoided getting bogged down in anachronistic notions of sexual identity. This suggested some real nuance and understanding of the past on the part of the either the writers or whoever the consulted. They were fighting under Hadrian, an emperor almost as famous for his public celebration of his young male lover Antinous as he is for his wall, and an excellent role-model for non-heteronormative love.

So, just some cultural critical thoughts on the use of the ancient world in this episode of Doctor Who. It was a strange episode, showing some real nuance and skill in what they did with it, cutting against prior false representations of antiquity, while in other ways being highly derivative of those materials at the same time.

Still, at least it was better than 'The Fires of Pompeii'. That episode sucked.

No episode of Doctor Who has come close to the treatment in the the Old Who episode 'The Stones of Blood'. Set in the days of Tom Baker, its a Hammeresque, Gothic take on druidism and blood sacrifice that simultaneously resists its schlocky, Gothic tradition. It's got the most true-to-life dramatic representation of an archaeologist in the form of Beatrix Lehmann's Prof. Rumford. The episode even points out the flimsiness of the nineteenth-century invention of the druids, pointing out that Tacitus and Caesar are the only real sources, and they are pretty dodgy at that! Of course, this is the foil against which the actual story line, about evil druidic forces, can play out. It is symptomatic of the light touch of Douglas Adams, who wrote the key of time series of which this is part, who at once could serve the intellectual and the silly in a way that few writers could ever manage.

1 For the record, I thought it was an OK episode--one which I think may hold up better on repeat viewing--but largely forgettable. ↩

2 Yes, I'm calling the episode a text. Some of use haven't jettisoned the linguistic turn just yet! ↩