June 24, 2019
Back in April, I was asked by the ever-awesome Dr Phil Jemmet of Hopefully Nothing Goes Boom! to help out at a public engagement shows at a Whitley Library. At the time we were both working for the same National Collaborative Outreach Programme partnership, which is normally highly targeted, so this was a chance to go for some wider, community-focussed fun stuff. He was going to put on some of his science communications presentations (which did look a lot of fun) and gave me a brief that went something along the lines of "there will be an unknown number of people of various ages, do something fun and archaeologyish with them" (definitely not verbatim). So, a free reign! 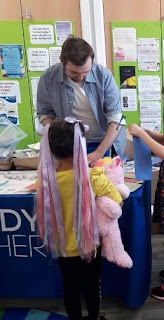 I'd helped Phil out at some sessions in one of his Widening Participation schools with an adapted version of my Caerleon Roman fortress workshop, but that wouldn't have been right here, and plus I wanted to try out some fun new stuff. I quickly settled on bringing together some things I'd done before with some new ideas I wanted to play with, under the branding "Awesome Archaeology". I was aiming for things that could be done by children but that could prompt deeper conversations. So, I planned:


I made up an activity book for these using Publisher, so that there could be guides out on the tables for the children and their adults to follow. Each guide was designed to be attractive and easy to use, and to provide some relevant extra snippets of historical information and visual examples. I'm really proud of how the activity book came out and I'll definitely develop it further for future use. I'd post it up here for download ... but a lot of the images I used I don't have any idea about their copyright status. If you'd be interested in using it though, please drop me a line through email or twitter or whatever.


I also produced some A3 signage as part of the activity pack, which included some "tag us on twitter" type calls to action, as well as some info about what historians and archaeologists do with some QR codes to videos talking about how they work as Higher Education pathways (we were working for a widening participation programme).

The day was a LOT of fun. We were a little delayed getting there. Not late or anything but less ahead of the published start time than we intended. The event was really popular. We weren't even trying to keep track of how many children and their adults that we spoke to, but there was a crowd building up ahead of the start time waiting to be let it! It did mean that we were still trying to get a couple of things ready when they came rushing through, and didn't get chance during the afternoon to fix anything that wasn't already done. I'm so glad that mine and Phil's colleague and co-conspirator Tara Aqeel had volunteered her time to come across too and help out. We couldn't have handled engaging with the crowds in such a positive way without her flitting back and forth between everyone. A lot of the photos below are courtesy of her as well.


Things that worked well: the clay coin making, and the laurel crowns. The coins prompted some really good engagement from some of the children (not to say some of the adults too!) and lots of discussion about relative and absolute value, and iconography. The laurel crowns introduced some good discussion, and allowed me to ask them whether it was intended to be for poetry, athletics etc. to get away from modern somewhat gendered expectations. Also I made myself a really awesome one that I definitely wore on the streets to get my car afterwards.

What didn't work: the curse tablets just didn't work without someone able to give explanation. Which because it was so busy, I couldn't do all the time. After a while I decided to nix it completely and refocus on the more successful activities. I had prepared some feedback postcards as an activity, but the set up wasn't really right for it and there was enough available so I withdrew those early on too.


It was a blast of a day. The tables were a mess afterwards, which is just as it should have been! And nothing compared to Phil's tables, where his sci-comms experiments had splashed coloured waters all over the place. The staff member from Reading Library services in charge was really excellent and interesting in his own right--he'd just returned from a Jurassic Coast fossil hunting trip so definitely my sort of fellow.

So, my thanks to Phil and Reading Library for inviting me, to Tara for her help, and to the public for engaging with gusto. And get in touch if you'd like to talk more or steal any materials for your own public or personal activities. 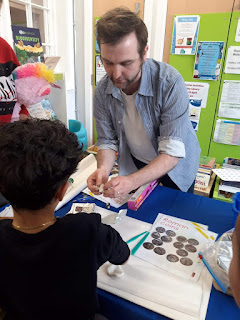 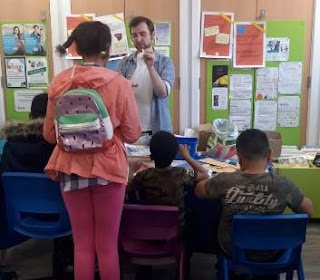